Making an archaeological record of caves in the field.

In conjunction with the British Cave Research Association, Cave Archaeology Special Interest Group I have put together a number of forms to be used when making an archaeological record of caves when visited and investigated.

Cave location: Where are you and more importantly where is the cave?

NGR: My preference is a hand held Garmin GPS, but most phones have GPS or you could use the relevant OS map.

Orientation: Which way does the cave entrance face? What is the general trend of the main passage?

Geology: There are some really useful free apps available from the British Geological Survey http://www.bgs.ac.uk/opengeoscience/ or use the relevant BGS map for the area.

Description: Record everything no matter how trivial it might seem at the time it might prove to be crucial at a later date.

Record what you see such as site conditions, topography and include any signs of disturbance either human or animal.

Make a note of any surface finds.

Remember even modern graffiti is a part of this caves history.

Sketch: A picture can be worth a thousand words! If you don’t have a scale then note ‘NTS’ not to scale.

Any other comments: You might turn up some further info or a reference to this site, some anecdotal evidence or local insight.

Photographs: yes or no. If you take photos then print some off and add to the record. Best advice is take lots of photos especially at remote sites and keep a record of the pictures you have taken.

Recorded by: Your name

Recording should be done in black pen as it photocopies better and doesn’t fade so better for archiving. Pencil isn’t a permanent record and should not be used.

The purpose of this form is the initial record of the cave, any further interventions should be recorded in an appropriate manner using the relevant conventions, i.e. excavation diary, context sheets, graphical representations, surveys, etc. If there isn’t enough space to record all details then use a continuation sheet.

A draft context sheet and continuation sheet are included with the cave recording forms: 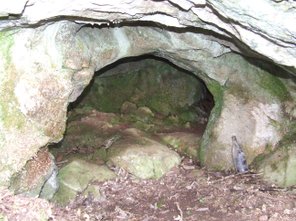 Guidelines to making a cave record.